On the 23rd, after the drama aired its first episode on 22nd, more than 1,700 complaints were filed with Korea Communications Commission and a national petition was posted on the Blue House asking for the drama to be suspended from airing due to its distortion of history and heavy use of Chinese PPL.

In particular, viewers described a scene where Prince Chung-nyeong and two people are guided to a gisaeng house decorated in Chinese-style. Food served was also Chinese, not Korean, and included Chinese moon cakes and pidan (saked duck eggs). Beside those were also Chinese dumplings and what appeared to be a Chinese style liquor bottle with the Chinese character for liquor written on it.

Viewers complained that it was uncomfortable to watch a Korean drama using Chinese-style items during a sensitive time due to recent issues in the North East. Recently, Song Joong-ki's tvN drama 'Vincenzo' was also heavily criticized for Chinese bibimbap PPL.

An aide from drama side stated in an official position, "In order to emphasize the situation in which the third prince (Prince Chung-nyeong) had to travel a long distance to the Chinese border in place of the crowned prince (Prince Yang-nyeong) to bring a priest to the west station near Uiju (Ming Dynasty border) we set up the location there and added subtitles like that. It was a place of rest for Guma-sa priests who came to Joseon through Ming so we prepared small items with the imagination that there would be a lot of traffic from the Chinese. It was set to explain the location of the characters in the far-off side of Hanyang in the drama, there was no special intentions behind it at all. However, it appears to be a scene that caused discomfort during a sensitive time. We're sorry."

However, netizens retorted to the official position stating, "Ming Dynasty never bordered Joseon at all during Tae-jong period and Uiju is not anywhere close to the Ming Dynasty border nor part of it."

Netizens also stated that there was a history distortion problem in the dialogue by Prince Chung-nyeong (Jang Dong-yoon) but they did not address that with their official position causing further anger. There are also further rumors that the drama's script writer is Chinese and not Korean.

Attention is being paid whether 'Joseon-gu Masa' will address the history distortion controversy. 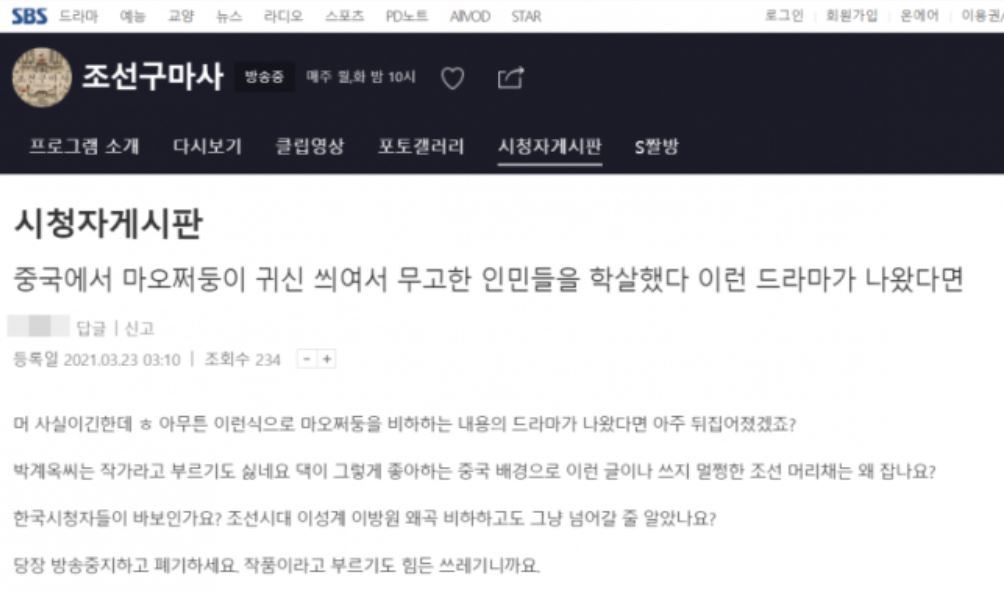