Victim A stated, "I was viciously bullied by Ji-soo. I was basically his "bread shuttle." He forced me to buy him bread and snacks from the school cafeteria using my own money. He would set a time like 1 or 2 minutes and if I made it back late, he would hit me. He'd call my cell and say, "you know you have to bring money tomorrow right? It started off from 5,000-10,000 won initially but later went up to 100,000 won. He was malicious with his bullying and would make me take his quizzes and midterms for him."

When asked why they didn't report him, A stated, "We did report him but they [bullies] weren't scared of the teachers. They'd just move on to the next kid and the bullying would continue. Later we began thinking nothing would change even if we reported it so no one dared to report it after that."

Another middle school classmate B stated, "He would kick me in the butt, thighs, strike me on my head, slap me on the face or punch me in my chest and pit of my stomach. He would give me missions like tell me to get up during class and sing or dance. I was basically his clown. He sat in the back row and used me as his shield so he could sleep. If my posture was even slightly off, he'd hit me in the back of my head."

The production team visited family members of one of the victims and the victim's mother revealed, "I remember flipping through TV one day and Ji-soo came on. I cursed his face and yelled ba$tard, beat my heart with fists and switched channels."

Another victim's mother stated, "I don't watch his dramas. Even now, he makes me shudder with rage. I remember going to talk with school principal at the time and I was shocked by his attitude." The husband continued, "on our way out I heard the principal saying, "they must have so much time on their hands. Do they have nothing to do? The homeroom teacher even called us and suggested we move elsewhere to avoid our child going to the same high school as Ji-soo."

Another classmate C revealed, "Ji-soo bullied a lot of kids. One of my close friends was particularly bullied by Jisoo. I have memories of us buying cup noodles and eating them behind a TV in school because he was afraid of running into Jisoo in the cafeteria. There's this hideout behind the school. It's a tomb. My friend was hit a lot in those graves behind the school."

Two other classmates D & E revealed, "Jisoo started off as a class bully until he was recruited a group of iljins. We called them "Iljin-pam." After that, Jisoo began using his power ordering other iljin kids to carry out his actions. If you were against them, you'd be ostracized by the whole grade and bullied."

One classmate F stated, "It's true that Jisoo was bully. He even admitted it himself. But there are some parts that aren't true...I just want to make sure he's getting punished only for what he did. From my memories I don't remember anything about Jisoo forcing sex acts on male students. The initial accuser that came out was also a vicious bully himself in his 1st and 2nd year who became an outcast in his 3rd year. He's putting the blame on Jisoo for things other kids did to him."

The production team also met up with Jisoo's elementary classmates and one of them revealed, "During retreat, I witnessed him force sex acts on some of the boys. Everyone in the class saw it. We pretended not to see it because we didn't want to become his next target." 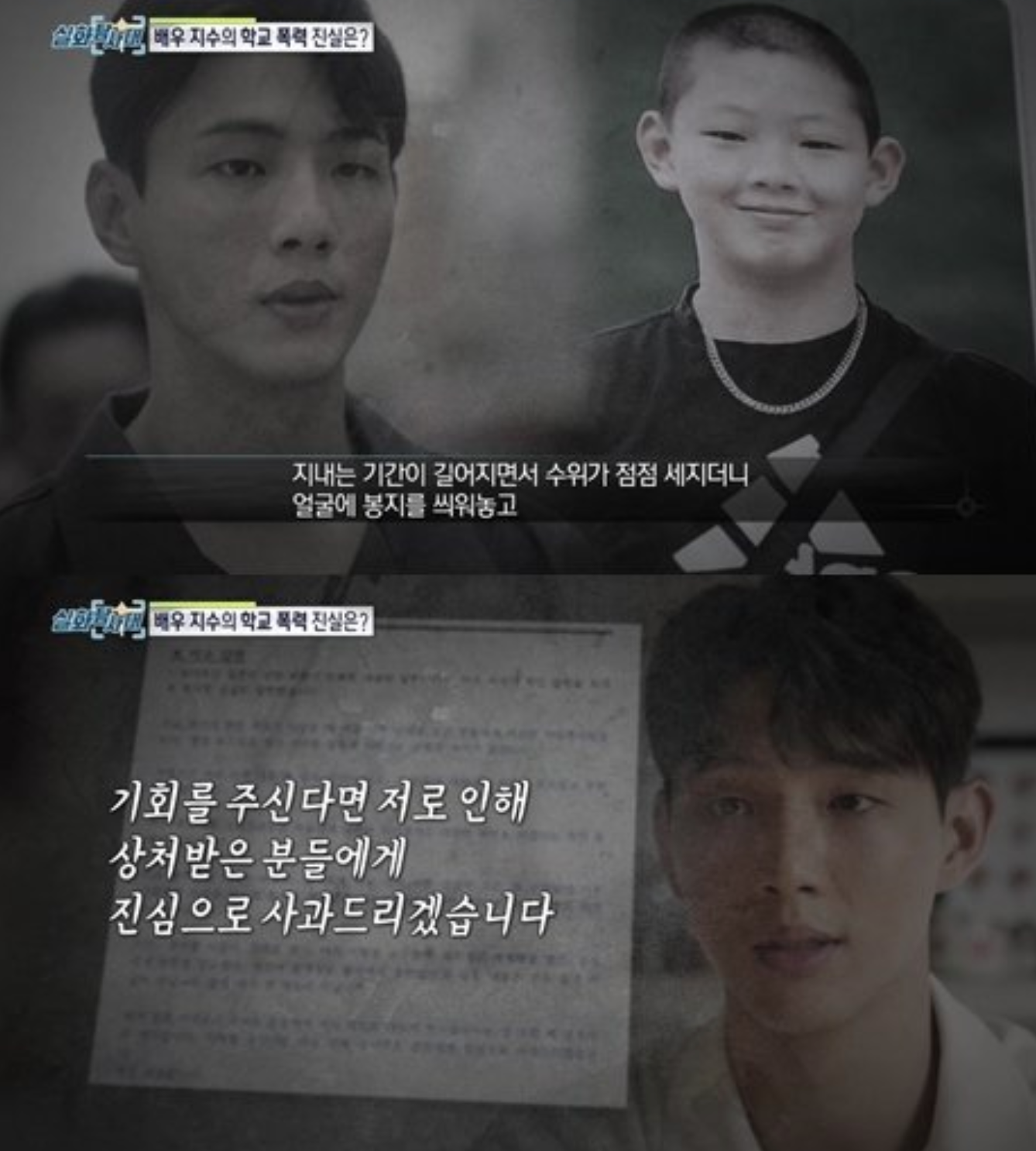 Jisoo's agency stated in a letter addressed to the program, "Jisoo is getting in contact with the victims to directly apologize to them."

Jisoo also wrote to the program and stated, "I hung out with a group of delinquents and foolishly believed in the illusion that I had great power in my hands. However, claims that I bullied classmates and forced them to buy things, take tests for me, sexually harassed or assaulted them are absolutely not true. If you give me a chance I would like to apologize to those that were hurt by my actions."

In the meantime, Jisoo plans to enlist in the military in the second half of the year.